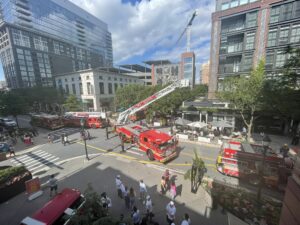 No injuries were reported in a kitchen fire Sunday at the Summer House Santa Monica restaurant in North Bethesda’s Pike & Rose.

Montgomery County Fire and Rescue Service (MCFRS) responded around 4:30 p.m. for the reported kitchen fire, according to MCFRS Chief Spokesperson Pete Piringer. The fire was also in the wall behind the stove. Piringer said the flames were primarily put out with fire extinguishers.

Damage is estimated around $25,000. The restaurant closed Sunday evening. It remains closed Monday, according to a staff member.

The fire did not extend to the PerSei apartments above the restaurant, Piringer said.