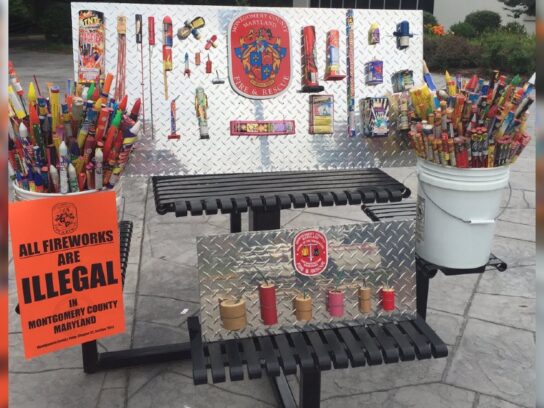 No serious firework-related injuries were reported over the fourth of July weekend, according to Montgomery County Fire and Rescue Service officials.

All public fourth of July firework displays were canceled locally due to COVID-19 concerns. Residents had been reminded that fireworks, including sparklers, are illegal in Montgomery County but that didn’t stop some people from using them. MCFRS officials say there were many firework noise complaints throughout the county over the weekend.

In Germantown, there was a significant house fire that MCFRS officials say was possibly caused by fireworks. It happened on the 19000 block of Perrone Drive around 1:20 a.m. on Sunday, leaving $175,000 in damages. One family, including two adults and one child, were displaced. Their dog did not survive.

DYK – @MontgomeryCoMD NO Serious firework related injuries were reported over 4th of July weekend, but there was one (1) significant house fire (Kingsview/Germantown) Likely caused by fireworks & resulted in 1 pet dog dead & 1 family displaced. There were many FW ‘Complaints’ https://t.co/rCjESgrUya

Residents Reminded That All Fireworks Are Illegal in Montgomery County