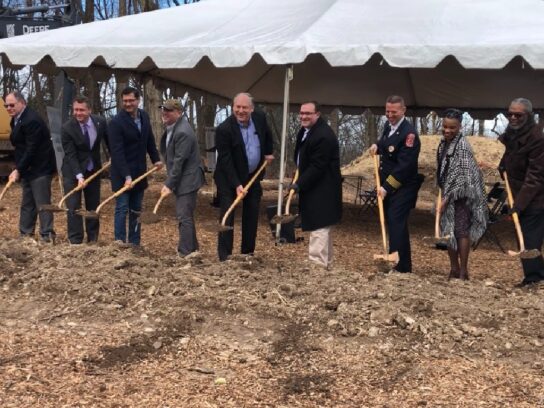 Clarksburg will have a new, permanent fire station to address the needs of a growing population, Montgomery County officials said during a groundbreaking event Friday.

The site at 23420 Frederick Road will one day house a two-story station with four drive through bays, living space for 22 firefighters and decontamination facilities for cancer risk reduction, according to the county. The project is expected to be completed in the next 18 months.

For 16 years, the Clarksburg Fire Station has operated out of a temporary facility on Gateway Center Drive, County Fire and Rescue Service Chief Scott Goldstein said. The new station will produce faster response times and will have a tanker to allow firefighters to bring 3,000 gallons of water to fires.

“Clarksburg is no longer under-occupied, it’s gone from 10,000 people to 25,000 people, on it’s way to 40,000 people, plus Cabin Branch,” said County Executive Marc Elrich. “So there’s going to be a lot of folks up here who are going to rely on this station.”

“So, it’s important that we keep pace with that growth by providing the infrastructure necessary,” Council Vice President Gabe Albornoz said.