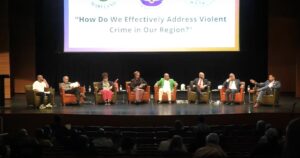 Regional leaders and panelists convened Thursday evening for a discussion about how to effectively address violent crime throughout Montgomery County, Prince George’s County and Washington, D.C.

In 2021, homicides and carjackings doubled in Montgomery County compared to 2020.

“Not defunding, but moving funds, I think is the heart of actually addressing violent crime to that holistic approach,” she said. Police respond to and investigate crime, Middlemass said, but they do not necessarily prevent it. She suggested funding for after-school programs and social workers to respond to mental health crises.

“You can’t just dip in, and I think too often our responses are quick, trying to put a bottle cap on it, simmer it down and then go back to business as usual,” he said.

“If the parents are not invested in school resource officers, then you shouldn’t have them,” she said.

“But if you’re going to have the program, it has to have a lot of checks and balances and a lot of supervision and oversight, because not every school resource officer is going to get the assignment,” Pruitt said.

Last August, MCPS leaders announced that instead of having SROs, community engagement officers (CEOs) would be assigned to school clusters. They are not stationed inside the school building or on campus but are stationed in surrounding neighborhoods outside the school.

But, incidents of violence this academic year, including the January school shooting at Magruder High that critically injured a 15-year-old student, prompted officials to propose an updated officer model, called the “CEO 2.0 Program.”

Jawando said the issue is systemic, not personal.

“Can a police officer be a trusted, caring adult that helps mentor children? Absolutely, and I know many of them,” Jawando said.

“But the question is, when you have a school that’s 2,000 students and you don’t have a school psychologist but you have a police officer, now we’re in a systems policy discussion. Of, what do we value, what are we spending our money on?”