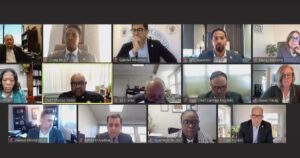 Last August, Montgomery County Public Schools (MCPS) leaders announced that instead of having school resource officers, the CEOs would be assigned to school clusters. They would not be inside the school building or on campus but officers would be stationed in surrounding neighborhoods outside the school.

Incidents of violence in schools this academic year have officials concerned. Last month, a Magruder High School student shot another student in a school bathroom.

A proposed updated officer model includes a designated workspace at each high school for the CEO, but the officer would not be permanently stationed there, said Ruschelle Reuben, MCPS Chief of Teaching, Learning and Schools. The CEO would have access to a desk, phone, computer and be able to work alongside school staff. Reuben emphasized that officers would not respond to incidents covered under the MCPS Code of Conduct.

Councilmember Will Jawando said he is concerned about the idea of armed law enforcement being present in a school building during high capacity times. Officials said they have discussed having CEOs at schools during high-traffic times like before classes start and after dismissal.

“Because that presence and proximity has an impact,” Jawando said.

Reuben said there has been an increase in suicidal ideation within schools.

“Everything has absolutely changed,” said Councilmember Nancy Navarro. “I am absolutely convinced that these two years and counting have come to really reset in so many ways everything that we have known.” It is the county’s responsibility to retool and respond to a new paradigm, she said.

“I’ve heard people describe this time as people walking around with PTSD. And it’s no hyperbole, it’s real.”

“I don’t care if that mentor has a uniform or a badge, is a nurse, is a cafeteria worker… it doesn’t matter who it is, we want to put as many of those potential mentors in front of our kids as possible.”

Other incidents of school violence this academic year include a fight just this month involving spectators and players that broke out toward the end of a boys’ basketball game between James Hubert Blake and Winston Churchill high schools. In Nov. 2021, a 16-year-old Montgomery Blair High School student was charged as an adult with attempted second-degree murder after allegedly stabbing another student in a school parking lot.

Last October, a football game between Seneca Valley and Northwest high schools was cut short due to a series of student fights. Also in October, a Walt Whitman High School male student assaulted a female student at Churchill High School and brandished a knife at others.

School Board President ‘Not Interested In Seeing the SROs Return’; Other Options Discussed