The Montgomery County Police Department (MCPD) continues to investigate a home invasion in Fairland that left a 57-year-old woman shot.

Upon arrival, officers found the front door to the Stravinsky Terrace home open. A woman was located inside the residence suffering from a gunshot wound, according to a press release.

The victim has been unable to provide information to detectives because of the injuries she sustained during the home invasion. While detectives have canvassed the area, they are asking anyone who witnessed suspicious activity in the neighborhood that morning or in the days prior to come forward. 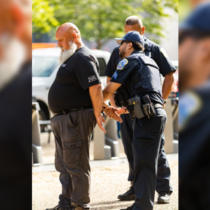