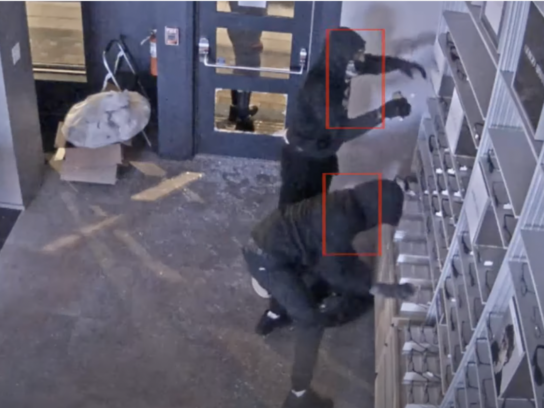 The Montgomery County Police Department (MCPD) continues to investigate a commercial burglary in Bethesda that occurred at LensCrafters on Dec. 1, 2021. Detectives are asking for the public’s help in identifying the three male suspects.

The investigation by 2nd district officers revealed that one of the suspects smashed a lower portion of the glass side entry door. The suspects then crawled through the broken portion of the door and gained access into the store. The suspects took merchandise from the shelves and placed the items in plastic bags before fleeing on foot, according to police.

You can view the recently released surveillance video here:

Police ask anyone with information on the crime or the three suspects to contact the 2nd District Investigation Section at 240-773-6710. People with information can also contact Crime Solvers of Montgomery County at 1-866-411-8477. MCPD is offering a reward of up to $10,000 for information that leads to the arrest of the suspects. Callers can remain anonymous.