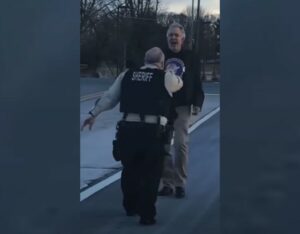 Screenshot from video of shooting.

The Montgomery County Sheriff’s deputy – who police say shot and killed a Laytonsville man after he struck the deputy with a long piece of wood  – has been identified, according to a sheriff’s office statement.

Sgt. Frank Pruitt is the deputy involved in the shooting, the statement reads. He is an 18-year veteran of the office and has been placed on paid administrative leave, as is protocol. The shooting is under investigation by the Montgomery County Police Department (MCPD); Sgt. Rebecca Innocenti, MCPD spokesperson, did not have any updates to share with MyMCM as of Wednesday.

Police said 911 received reports of collisions in the 6000 block of MD-108 (Olney Laytonsville Road), between Riggs and Fieldcrest Roads. Callers said someone was “driving and acting erratically” according to the statement, and struck multiple cars. Police said Pruitt was in the area at the time and was the first at the scene in the MD-108 and Fieldcrest Road area. Pruitt encountered Costlow, police said, and video of the encounter posted to YouTube shows Costlow walking toward Pruitt with a long, wooden stick as Pruitt retreats with his gun drawn and pointed at Costlow. Costlow is seen raising the stick and slamming it down twice to try to hit Pruitt. MCPD said Costlow struck Pruitt in the head and neck area.

In the video, Pruitt begins shooting and 12 gunshots are heard before Costlow falls to the ground. He was pronounced deceased at the scene, police said. Pruitt was taken to a hospital with non-life threatening injuries. During a press conference, Sheriff Darren Popkin said deputies do wear body cameras, but that he did not know if the camera was activated during the shooting. Police Chief Marcus Jones said Costlow’s driving caused two collisions, and there are possibly two people in addition to Pruitt who were injured. Jones said he doesn’t think they were taken to the hospital. MCPD asks anyone with relevant information to contact the Major Crimes Division at 240-773-5070, and callers may be anonymous.