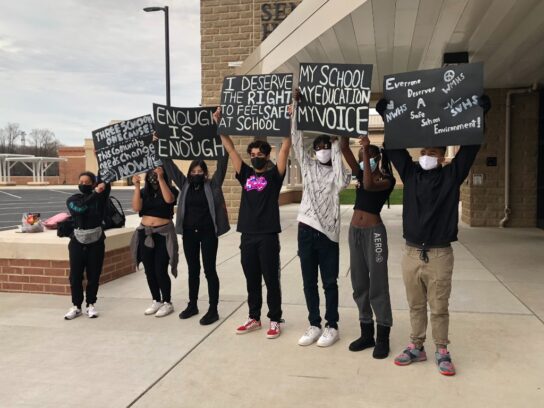 “All the shelters-in-place, the lockdowns, the unexpected bomb threats we’ve been having,” said Yeimy Arango, a senior at Seneca Valley who organized the protest. “And it’s not just that — we’ve been having so many fights at school.”

Several students gathered outside the Germantown school with signs to protest for their right to safety at school. They were supported by students from Watkins Mill High School in Gaithersburg.

“We wanted to show our solidarity with Seneca Valley because this is a community issue, not a school issue,” said Hasham Khan, a senior at Watkins Mill.

Just last week, students at Seneca Valley were evacuated twice due to safety threats, including reports of a bomb threat. Students also sheltered in place in October after the school received another threat, and in the same month a football game against Northwest High School was cut short following a series of student fights.

Arango started a petition detailing student demands. It had 171 signatures as of Friday evening. According to the petition, demands include transparency during/after conflicts, policies for more restorative services for students, mandatory mental health screening, more counselors and a more secure sign-in system, among other asks. Arango said students plan to take it to the county council and the Montgomery County Public Schools (MCPS) school board. She said they are not blaming school administration but want to work with them to create a safer school environment.

Juan Arango is a county contractor who works at Seneca Valley. He joined the protest to support students, including his younger sister.

“It’s just been crazy, what’s been going on at the schools. I’ve had to call off of work three or four times already just because there’s a gun threat, or there’s a bomb threat,” he said.

On Thursday, MCPS posted a statement after social media posts circulated about threats of violence against schools nationwide to occur on Friday. MCPS said the threats, which mention a school shooting or bomb threat, were also made toward schools locally but there was no indication of credibility. Still, the school system and police department will continue to monitor social media and investigate any threats.

“Instead of just sending out generic text messages, they need to actually tell us to stay home, shut down school for a day, because our lives are more important than what we’re learning in school,” said Khady Mbodj, a senior at Watkins Mill High School.

“We don’t want to have a situation where they are saying their condolences to their families. We want to prevent it before it’s even happening.” 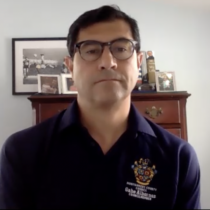