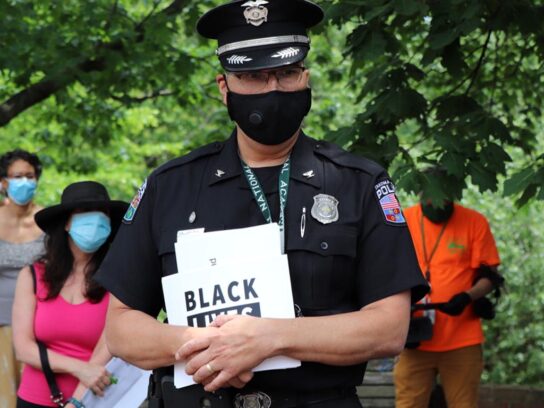 On Tuesday, City of Takoma Park Police Chief Antonio DeVaul spoke to MyMCMedia about his reaction to the video showing George Floyd dying at the hands of a police officer in Minneapolis.

In addition to holding the officer who killed Floyd accountable, DeVaul says the three other officers who were present should also be held accountable. Here’s what DeVaul said about his reaction to Floyd’s death and what he feels he can do to improve Takoma Park Police Department:

DeVaul released a statement Thursday in response to the 8 Can’t Wait policing reform campaign. The campaign has eight recommendations for police departments to enact, which the campaign says would reduce police killings by 72%.

DeVaul said he’s aware of the campaign recommendations and to some degree Takoma Park Police Department already has implemented the eight policies. According to DeVaul, the department is currently reviewing its use of force policies.

“Specifically, the ban of chokeholds except where deadly force is needed and the language used in the section ‘exhaust all other means before shooting,'” said DeVaul.

Here’s a look at the full statement from DeVaul:

We are currently in the process of reviewing our use of force policies. Specifically, the ban of chokeholds except where deadly force is needed and the language used in the section “exhaust all other means before shooting.”

We look forward to working with members of the community and our City Council, as we review this and other policies in our efforts to increase community policing and building trust across the community. We are also compiling information to provide to the public about the training provided to officers.

Background on the #8CANTWAIT Use of Force Policy Recommendations

Eight recommendations made by #8CANTWAIT

Below is an overview of the #8CANTWAIT recommendations and our related policies.

Each department member has the individual responsibility to intervene and attempt to stop any other member from committing an unlawful or improper act, including but not limited to, acts of brutality, abuses of process, abuses of authority, and any other criminal acts or major violations of department rules and procedures. Successful intervention does not negate a duty to report.

Our current policies require all officers to use de-escalation techniques prior to using force.

Our current policy prohibits officers from shooting at or from moving vehicles unless circumstances would authorize deadly force.

Officers are prohibited from intentionally placing themselves in the path of a moving vehicle where an officer’s use of deadly force would be the probable outcome. When confronted by an oncoming vehicle, officers will move out of its path, if possible, rather than fire at the vehicle.

Our current policy bans the use of chokeholds except where deadly force is needed.

Our department requires comprehensive reporting and review of all use of force incidents. The list of reporting requirements is extensive. They can be found on our website under general orders, Use of Force, General Order 617.

Require Use of Force Continuum:

Our department has a use of force continuum that officers are trained in and must follow.

Exhaust All Other Means Before Shooting:

Our current policy requires officers to use only that amount of force, which is reasonable and necessary. Officers are required at all times to exhaust every other reasonable means of apprehension before resorting to the use of deadly force. Officers may use deadly force to defend themselves or another person from what they reasonably believe is an imminent threat of death or serious physical injury. The U.S. Supreme Court has ruled that any use of deadly force must be objectively reasonable. This standard will be applied to all uses of deadly force regardless of whether or not a suspect is fleeing when an officer employs deadly force.

Our firearms training and policies require all officers to provide warnings before shooting.