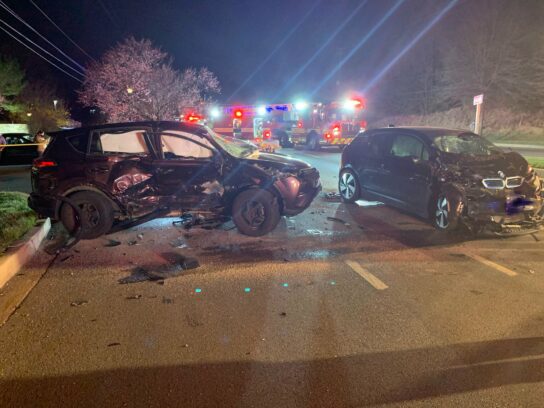 A Nashville, Tennessee woman pled guilty Tuesday to two counts of negligent manslaughter in a collision that caused the deaths of a Gaithersburg couple.

Rebecca Thuc Hoang Vo, 39, will be sentenced Feb. 4 for driving drunk in a collision that resulted in the deaths of Pran and Pamela Sharma, who are grandparents. The crash took place on Darnestown Road and Blackberry Drive in Gaithersburg at 8:30 p.m. on March 27.

“Our hearts go out to the Sharma family, particularly so close to the holidays. It’s a time when families typically come together and Pran and Pamela Sharma will be greatly missed on this first Thanksgiving without them,” said John McCarthy, state’s attorney for Montgomery County.

According to facts revealed during Tuesday’s court hearing, the BMW struck the Toyota in the intersection, causing the Toyota to rotate clockwise, struck the curb and then roll over onto the driver’s side before coming to rest on its wheels. The driver was taken to Inova Fairfax Hospital, where he died on March 30. According to court records, Sharma died from blunt force trauma to the head and thorax.

Pamela was transported to Suburban Hospital and pronounced dead March 28 from multiple injuries.

A witness, who was riding in a Jeep Wrangler on Darnestown Road, provided a statement for the court record. According to the statement, “I noticed the black BMW. The BMW passed us in the right lane and then swerved in front of us, cutting us off. The BMW then passed a car in the right lane and then swerved back in front of that car. The BMW then had to slam on its [brakes] as the light had changed from yellow to red at the intersection with Quince Orchard Road. The BMW stopped at the red light in the right lane. When the light turned green, the BMW gave it some gas and got going. It ended up getting about 300 to 500 feet ahead of us. I did not see the collision but heard a bang.”

When a police officer arrived at the scene, Vo was on her cell phone to the owner of the car she was driving. The officer smelled alcohol on her breath, heard her slurred speech and noticed her blood shot eyes, according to court testimony provided by the state’s attorney’s office for Montgomery County.

The officer administered a Standardized Field Sobriety Test, during which time Vo swayed back and forth, according to court records. He also had her walk and turn and stand on one leg.

According to the officer, Vo could not keep her balance, stopped walked a few times, had trouble walking heel to toe and took 13 steps instead of nine. She also had trouble balancing on one foot and needed her arms to balance.

She was arrested at the scene. At the police station, she submitted to a breath test almost two-and-a-half hours after the crash. She scored a .13. In Maryland, .08 and above is considering driving under the influence.

Vo’s written statement given to a detective noted, “I was heading southbound. I was going through, and the other car would have had to yield, and it did not. The other car was coming from the right of my vehicle. I honestly didn’t see the other car before it happened. I felt a bit blindsided. As far as I know it wasn’t at a proper place you can turn. It wasn’t at an actual junction. That’s as much as I remember. I don’t remember the actual collision. Then I remember speaking to representatives of the police force. I have no memory of what happened between the car pulling out and speaking to the police.”

According to police, the impact speed for the Toyota was 10 miles per hour while the impact speed for the BMW was 66 miles per hour. Police also noted that five seconds before the crash, Vo depressed the accelerator pedal at 100%, bringing the speed up from 65 miles an hour to 75 miles an hour. Police did not observe any pre-impact braking marks by the BMW.

Police believe that if Vo had been driving the road’s speed limit of 30 miles per hour, the collision could have been avoided.