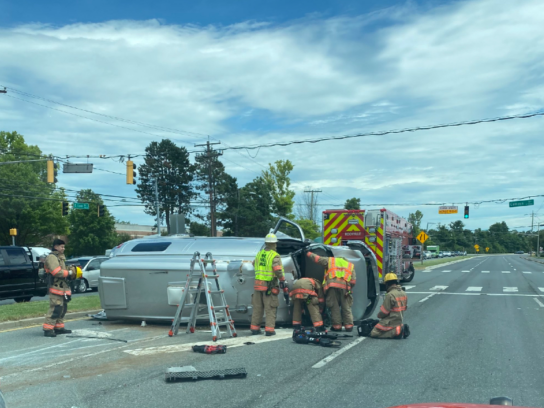 A van rolled over in Derwood following a collision with a bus Wednesday afternoon, according to Montgomery County Fire and Rescue Chief Spokesperson Pete Piringer

Just after 1 p.m., emergency personnel responded to the scene at E Gude Drive and Calhoun Drive. Officials extricated two people who were trapped inside the van. A dog passenger was ejected and ran away, Piringer said. The dog is currently missing.

Four people were transported to a local hospital and several other passengers refused medical treatment, according to Piringer.

Update – E Gude Dr & Calhoun Drive, collision, then rolled over, 2 human occupants were trapped & were extricated, however a dog (pit bull) passenger was ejected and ran away, currently missing