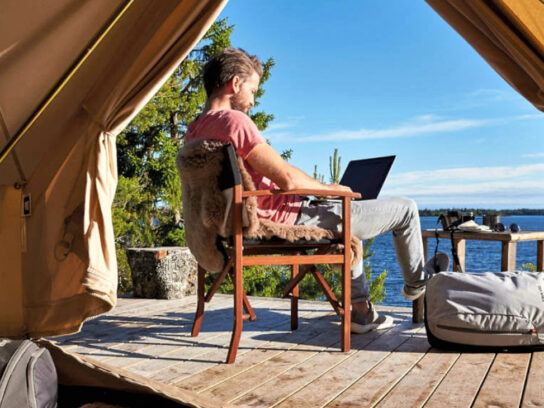 Tired of that obnoxious boss?  Sick of freezing winter?  Peeved that your country and its pandemic has killed almost a million of its citizens, and is sliding from democracy into a pit of corrupt autocracy?

No problem!  Become a digital nomad, and work from paradise!

According to TheBrokeBackpacker.com, there are about 35 million digital nomads worldwide, with 11 million in the U.S. alone.  That latter figure has more than doubled in the last three years, as the pandemic has forced people to work from home, and it has become clear that “home” can mean anywhere in the U.S. or on Earth that has a good internet connection and a reliable power supply.

Countries around the world have realized that vigorous, smart digital workers who have transportable jobs and foreign clients are an economic asset, not a liability.  As any economist or foreign central banker knows, “multiplier theory” shows that if you can attract a source of external inward flow of revenue into your country, the economic benefits are huge.  This is because a foreign dollar spent locally usually multiplies two to four times, as it is spent and re-spent inside the country.  Take a real example: Bali in Indonesia has attracted over 5,000 digital nomads, and if the average nomad earns only $60,000+ per year and spends a third of that locally, and the “multiplier” is 2.5, then $250,00,000 per year of economic development is generated ($60,000 x .33333 x 5000 x 2.5).

So, you’ve decided to head out and give digital nomading a try – where should you go?   According to NomadGirl.co, there are about 41 of the 196 countries on Earth that have already created some form of “digital nomad visa” or program.

NomadGirl says that the Republic of Georgia is “one of the best digital nomad destinations,” where citizens of “95 countries can enter visa-free and stay up to 365 days.”  If you want to participate in a long-term program, you need to prove you make $2000+ per month and have $24,000 in the bank.  Then you are taxed only 1% on all earnings up to $155,000 per year.  If you register as a small business, that can lead to permanent resident status.  By the way, Georgia is a fascinating country with great wine, beautiful mountains, terrific history, a very low cost of living, and an attractive capital city.  (Of course, Putin is your neighbor.  Don’t stay too long.)

More of a beach bunny?  The “Barbados Welcome Stamp” program allows you to stay up to 12 months and pay no income tax!  You do have to pay a $2,000 non-refundable visa fee, prove that you earn more than $50,000 per year, and bring private health insurance with you.  Or if you want to just stay for a short time, you can get a six-month tourist visa instead.  Barbados has some of the fastest internet speeds in the Caribbean, at over 110 Mbps download on fixed lines.

Estonia – with one of the most advanced digital economies in the world, far ahead of the U.S. – was naturally the first in the world to offer a digital visa, which was rolled out in June 2020.  The visa is good for a year, can be extended for six months, and only costs $130.  But you must prove a remote self-employed income of about $5,000 per month, or have a contract and salary with a foreign company that allows you to work in Estonia.

Kayak.com has a new “remote work rankings” of 111 countries, and Portugal is ranked as the best in the world. The country offers an “independent workers visa” good for one year, extendable up to five years, which may lead to permanent residency and even dual U.S.-Portuguese citizenship.  The visa, residence and other fees total about $800.  With this visa in hand, you can travel easily throughout the normally restrictive European Union and Schengen Zone.

Where to avoid?  Well, the Kayak index puts Lebanon, Zimbabwe, Algeria and other troubled countries in the bottom tenth of countries for digital work.  But coming in at the worst of all is – wait for it — the U.S. Virgin Islands!  Huh?  This odd ranking seems to be driven by a “poor social life,” high cost of living, bad download speeds, and lack of co-working facilities.