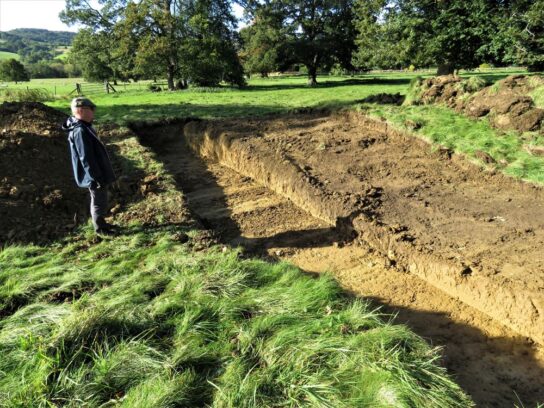 Recall from my column last month that in October 2021 I participated in an archaeological dig at Sudeley Castle in Gloucestershire, searching for the missing Banqueting Hall of Queen Elizabeth I, and also her missing Tudor Garden. So, did we find them?

Our team found the Tudor Garden – although fully documenting it will take more work. The very formal layout has been largely confirmed by LiDaR (light detection and ranging) and trenching, with formal beds and mazes near the main castle, further garden beds extending outwards, a circular walkway, an inner bank, and a centerpiece circular water feature, likely a fountain fed by a well. The Garden appears to have been built in two phases, the first in the 1540s, with an extension in the 1570s. The overall Tudor Garden size is astounding, perhaps 500 by 500 yards.

Later the Tudor Garden was covered up with a substantial layer of earth, probably when such formal gardens fell out of favor. In this third phase, a huge, naturalistic landscape garden was built, with undulating small hills, rolled grass, and serpentine ponds with walkways and bridges.

The cost of the garden was incredible – each of the three building phases would likely cost at least ten million dollars today.

Historical research undertaken during the dig revealed that the term “banqueting” in Elizabethan times referred to what we would today call eating the dessert course in an elaborate meal. “Banqueting” in this instance meant that the host and his staff would go into the Tudor Garden, shortly before the meal, coat the flowers with gum water, then sprinkle the flowers with sugar — very expensive at the time. So for the dessert/”banqueting” course, the guests would walk around the garden, and find and eat the live, sugar-coated flowers!

And the missing Banqueting Hall? Well, that is a definite maybe. The team found a very substantial dry-stone wall, almost a meter wide, with massive, deep footings. At first we thought this was the foundation of the semi-temporary (but substantial) Hall. But as digging and probing revealed more and more wall – more than 30 meters and counting – it became likely that this was the substantial back wall of the Tudor Garden, covered up by the later third phase of garden construction.

The picture was clouded by finding numerous sandstone roof tiles, and stone Tudor Rose and other decorations – I think that indicates a substantial, more permanent Banqueting Hall. But the expert archaeologists on the team felt that all that material was more likely just fill from phase three of construction, brought in from the nearby, ruined Winchcombe Abbey to build up the landscape and cover the Tudor Garden. So, it looks like more searching for the Banqueting Hall is needed in 2022.

If you want to participate in the search, for a day, several days, or a week, check out the non-profit DigVentures.com. Signups opened on December 1, 2021, and places go very fast, as Brits are “mad keen” on archaeology!