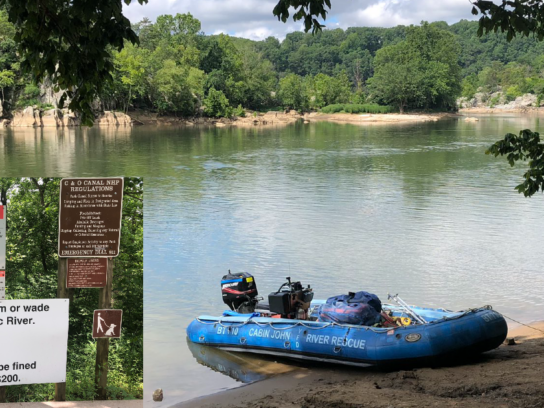 UPDATE (Aug.25) – The body found in the Potomac River on Monday has been identified as 27-year-old Jason Lloyde Scrivo of Leesburg, Va., according to the Montgomery County Police Detectives from the Major Crimes Division.

Scrivo’s body was found in the river by Harrison Island. It was transported to the Office of the Chief Medical Examiner in Baltimore for an autopsy.

Anyone with information regarding Scrivo’s death is asked to call the Major Crimes Division at 240-773-5070.
[hr]

Original Post (Aug. 24): A body was found this afternoon in the Potomac River in the Dickerson area, and Montgomery County Police Department is conducting a death investigation.

Police were called to the area at 2:30 p.m., and a water search was conducted. The body was located in the area of Red Rock, just south of Harrison Island.

Update – Potomac River, a body has been located IAO VA shore at "Red Rock" just south of Harrison Is.  MCPD have been ferried to area on @mcfrs BT731 presumably to begin a death investigation. @MontgomeryCoMD @LoudounSheriff @LoudounFire https://t.co/kjtG6uIPLk pic.twitter.com/XIJj5nRJM4

Update – Potomac River in area of Harrison Island, likely recovery operation however at this time boats in water searching for report of body in water https://t.co/Z5EfXFINIV