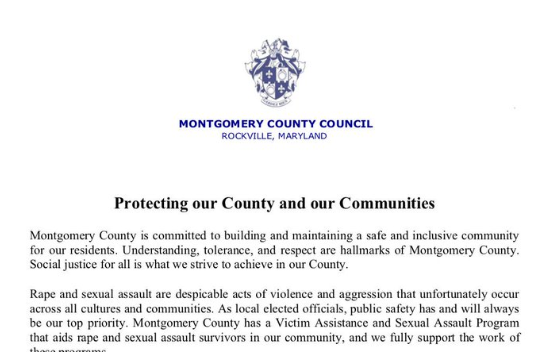 The Montgomery County Council released a statement Thursday night expressing their commitment to an inclusive community and condemning a series of rapes over the last month.

The council also vilified its critics, including President Donald Trump and neo-Nazis, for spreading “inaccurate information.”

The statement comes after recent reports of rapes in the county. The defendants in several of the cases are in the country illegally.

Some conservative news organizations have used the cases to lambaste County Executive Marc Elrich for an executive order he issued that spells out what the county will and will not do to assist Immigration and Customs Enforcement (ICE).

That in turn led to a Fox News report and White House tweet.

Since July 25, 7 illegal aliens protected by the "sanctuary" county have been arrested for rape and sexual assaults. https://t.co/HuFyJqXVdn

Here’s the council’s statement in full:

Protecting our County and our Communities

Montgomery County is committed to building and maintaining a safe and inclusive community for our residents. Understanding, tolerance, and respect are hallmarks of Montgomery County. Social justice for all is what we strive to achieve in our County.

Rape and sexual assault are despicable acts of violence and aggression that unfortunately occur across all cultures and communities. As local elected officials, public safety has and will always be our top priority. Montgomery County has a Victim Assistance and Sexual Assault Program that aids rape and sexual assault survivors in our community, and we fully support the work of these programs.

The recent crimes of rape and the sexual assaults that have occurred in Montgomery County are horrendously vile acts, and the alleged perpetrators of these crimes are currently going through the legal process and will receive their judgements in court. The Montgomery County Police Department arrests and the State’s Attorney’s Office prosecutes individuals who commit violent criminal acts in our community. We rely on and support them as they work together to deliver justice to rape and sexual assault victims and their families.

There has been a lot inaccurate information spread by the White House, President Trump, Acting USCIS Director Ken Cuccinelli, local and national conservative news outlets and neo-Nazi sympathizers regarding our criminal justice system and its process. These individuals and organizations should be ashamed for spreading false information seeking to establish a baseless, illogical and xenophobic connection between a person’s failure to obtain legal status and their propensity to commit a sex crime.

Montgomery County has earned a reputation as a great place to live, work and raise a family, not despite of, but because of who we are. We are teachers, scholars, scientists, engineers and our small businesses power the engines of our economy. We will not be defined by a racist paintbrush designed to stoke unreasonable fear and tensions in our county.

Elrich signed the Promoting Community Trust Executive Order on July 22. In it, county employees including the police are unable to assist federal immigration authorities without of warrant signed by a judge. An administrative warrant or immigration detainer is insufficient.

At a news conference Aug. 27, Elrich told reporters the order codified what had been the policy under his predecessor, Isiah Leggett. The only difference was that the order spelled out ICE agents would not be allowed in secure areas of the Montgomery County Detention Facility, Elrich said.

Elrich has said he’s willing to revisit where ICE agents can pick up detained suspects.

“Nothing is going to change. He’s doubled down,” McHugh said.

The council held a closed session Wednesday on its own security. Sources say the Thursday statement was a topic of conversation.

Meanwhile, the Montgomery County Federation of Republican Women issued their own statement, expressing its outrage at the recent rapes.

We are Montgomery County mothers, grandmothers, professional women and stay-at-home moms who once again call upon all our county elected officials to focus their efforts on protecting everyone in Montgomery County, including the most vulnerable in our county — young women and girls, especially those in our immigrant communities.

Criminals and gang members should not have the opportunity to prey on young girls. What kind of elected officials would choose to give “sanctuary” to those who commit such acts, when they have every opportunity and resource to remove them BEFORE they cause such human devastation.

We are outraged and horrified by the seven rapes in Montgomery County reported in August alone, of innocent young women and girls, some as young as 11 years old.

Further, we are shocked and deeply disappointed that the Montgomery County Council chose to use its official position to issue an outrageously ideological statement. They chose to describe Montgomery County residents and all those who voiced a justifiable and sincere outrage over these reported crimes, as “Neo-Nazi sympathizers” which only foments hate and division in the county, in order to deflect away from their failure as our elected officials.

We call on all County elected officials to focus their time and attention on the tasks of properly running the county government and most importantly protecting the most vulnerable in Montgomery County, including in our immigrant communities.

Montgomery County is committed to building and maintaining a safe and inclusive community for our residents. Understanding, tolerance, and respect are hallmarks of Montgomery County. Social justice for all is what we strive to achieve in our County… pic.twitter.com/BLxvkm56zl