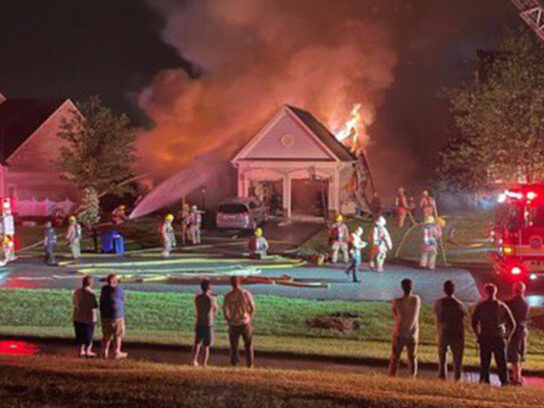 A house in Damascus caught fire on Monday evening after it was likely struck by lightning, causing about $800,000 in damages to the home and neighboring homes.

According to Pete Piringer, spokesperson for Montgomery County Fire and Rescue Services, the family that lives in the home—cosisting of two adults and three children—have been displaced but none of them were injured.

Piringer tweeted that the fire started before 10:30 p.m. at a house located on the 24,800 block of Sweet Cherry Lane. More than 75 firefighters were dispatched to the scene and all of the occupants of the home were already outside. The house was “fully engulfed” in flames by the time firefighters arrived, Piringer tweeted.

There were severe thunderstorms throughout the area on Monday night. At the time of the fire in Damascus, the National Weather Service issued a flash flood warning for areas in Montgomery County.

Other neighboring houses received around $50,000 in collateral heat damages, according to Piringer.

Firefighters are revisiting the neighborhood Tuesday for an “After-the-Fire” safety initiative where first responders check smoke alarms and educate the community about fire safety.

In addition to the fire in Damascus, Piringer also tweeted that lightning struck a home in Potomac, setting off a fire alarm, but there was no fire evident.