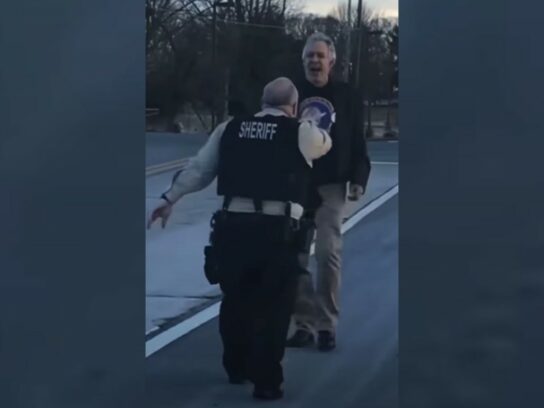 The Montgomery County Sheriff’s Deputy who shot and killed a Laytonsville man, who multiple witnesses said was acting erratically and struck the deputy with a long piece of wood, acted reasonably and will not be charged, according to Howard County State’s Attorney’s Office.

That office reviewed the incident under an agreement to take the lead in police-involved fatal shootings in Montgomery County.

According to the report, Deputy Frank Pruitt’s actions on Feb. 6 were reasonable as Kevin Costlow repeatedly swung at and struck Pruitt and also refused to obey Pruitt’s commands. Pruitt, an 18-year-veteran of the force was placed on paid administrative leave following the shooting of Costlow, 52.

According to Montgomery County Police, a multivehicle crash occurred in the 6000 block of Olney Laytonsville Road in Gaithersburg at  8 a.m. on Feb. 6. Observers called police to say that someone driving a Volkswagen caused another car to swerve off the road and into a pole and then continued on, hitting a second vehicle head-on. They told police the driver of the Volkswagen was acting strangely and was trying to fight people.

Pruitt, who was nearby, arrived on the scene and reported that the driver rushed at him and began attacking him, according to the Howard County State’s Attorneys report. “Shortly thereafter, the driver picked up a large stick and began striking the deputy over the head,” it states in the report. Pruitt then fired multiple rounds, striking and killing Costlow.

Police reviewed cell phone video of the incident from two witnesses and interviewed at least 14 witnesses, including Cidicley Da Silva Araujo, the driver who swerved off the road.

According to the Howard County State’s Attorney’s Office report, Araujo was taking pictures of the Volkswagen when Costlow climbed out of the passenger side window of his car and grabbed a piece of wood. It states in the report, “According to Araujo, Costlow was very ‘amped up’ and was saying ‘what do you want, what do you want?’ At this point, Araujo ran back to his car.”

When Pruitt arrived on the scene, Costlow rushed at him while holding a rosary and screaming and yelling something about praying, according to the Howard County State’s Attorney’s Office report. Pruitt reported he then told Costlow to sit on the curb, but he did not. Pruitt said he then activated his body camera but it was later determined that it had not been activated and had not recorded anything.

Pruitt said that after Costlow threw a manila envelope at him, he pulled out his Taser, while noticing a necktie was hanging out of Costlow’s car and that Costlow was hitting other cars with sticks that were about four feet long and appeared to be tree branches without bark.

Suddenly, Pruitt told Howard County officials, Costlow rushed back at Pruitt and knocked his hat off and ripped his mask off. Pruitt reported that he then pushed Costlow away in an effort to use his Taser. When Costlow went to shoot the Taser, he noticed wires were hanging out as if it had already been used. Therefore, Pritt said he pulled out his handgun.

Pruitt told Howard County officials that Costlow, who had recently been involved in an earlier car accident, was growling and incoherent during this time, according to the report.

Below is a video of the sheriff shooting Costlow. Warning: the video is graphic.