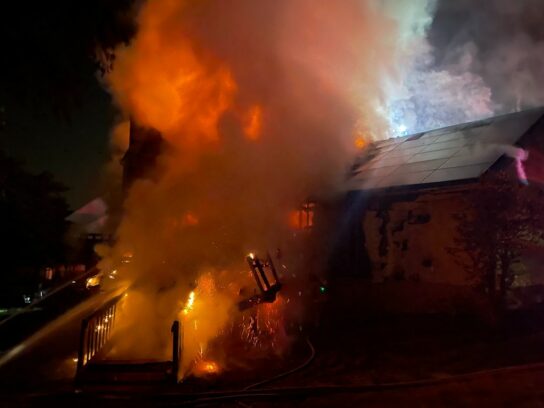 Four adults are displaced after a house fire on the 2300 block of Holly Spring Drive in Burtonsville, per Montgomery County Fire and Rescue Service (MCFRS) Chief Spokesperson Pete Piringer.

MCFRS responded around 11 p.m. July 4 and found heavy fire upon arrival, Piringer said. There was significant fire in the rear of the single-family house and deck area. All occupants got out and there were no injuries.

Piringer said damage was significant and is estimated to cost around $1 million. The area of origin is the rear deck or laundry room, Piringer said. The cause is under investigation; there was limited examination because the deck and laundry room floor collapsed.

An occupant smelled and saw smoke and flames in the deck area; a neighbor called 911.

Piringer noted that the deck was covered with vinyl flooring, which he said is “excellent fuel for fire.” Also, a contractor installed a new HVAC unit that day, which could have involved electrical system work. The only ignition sources shared between the deck and laundry room were electrical.