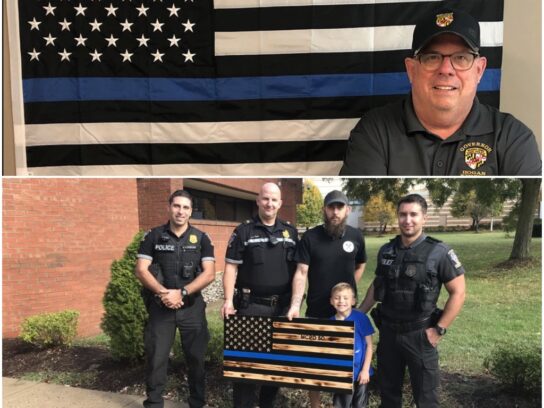 On Oct. 30, Montgomery County Police Department tweeted a photo of a wooden Thin Blue Line flag crafted by a young boy as a gift to Germantown District officers. The boy made the flag in honor of National First Responders Day.

In the tweet, MCPD said the flag would be displayed in the Germantown District Station.

Thank you to resident James Shelton, who presented Montgomery County 5th District officers with a wooden American Flag that he had made in recognition of National First Responders Day. The flag will be displayed in the 5th District Station. pic.twitter.com/kbAI32xHkY

Since then, the county executive has asked the station not to display the flag. MCPD tweeted a note from Elrich, on Nov. 1.

Elrich said in the note that the “flag will not be posted at the 5th District nor in any public space within the Police Department.”

The flag provides a symbol of support to some but it is a symbol of dismissiveness to others. Because it is divisive, the flag will not be posted at the 5th District nor in any public space within the Police Department. Under my administration, we are committed to improving police relations with the community and will immediately address any action that stands against our mission.

On Sunday, Hogan strongly rebuked Elrich’s decision and had four posts on his Facebook page condemning Elrich, urging him to allow the hanging of the flag.

I have attended the funerals of fallen law enforcement officers across our state, and I take time to thank them every day for their dedicated service and sacrifice.

I strongly call on Mr. Elrich to immediately reverse this terrible decision and to apologize to the police and the citizens of Montgomery County.

In a statement shared to social media, which included photos of the governor standing before Thin Blue Line flags, Hogan said:

We have been proud to hang these Thin Blue Line flags in Government House to honor the service and sacrifice of our brave law enforcement officers. These flags are on display in the Executive Protection Command Center, where our State Troopers work every day.

It is simply not appropriate or acceptable for the county executive to arbitrarily ban police officers from displaying a Thin Blue Line flag that was donated to them by a young boy in honor of National First Responders Day.

We will continue to respect and honor the men and women who have so selflessly given their lives to protect our communities.

We are proud to hang these Thin Blue Line flags in Government House to honor our brave law enforcement officers. A local elected official prohibiting police from displaying a flag given to them by a grateful child is disgraceful. pic.twitter.com/PmPGzfSSF1

During a press conference with reporters Monday afternoon, Elrich doubled down on his decision to ban the flag. Elrich told reporters that he understands that some see the flag as a Thin Blue Line flag, but the flag has also be adopted by the Blue Lives Matter movement, which is seen in opposition with Black Lives Matter.

Hogan isn’t the only one to attack Elrich for his decision. On Saturday, the Fraternal Order of Police Lodge 35 released a statement saying, “on behalf of the 1500 active and retired law enforcement officers of Montgomery County,” it would “be honored” to accept the Thin Blue Line flag made by the young boy and banned by Elrich.

“We condemn this arbitrary, political action and are especially disappointed that Marcus Jones does not demonstrate appreciation and understanding of the concerns of working police officers.”

Elrich has found support from other local politicians, including Del. Gabriel Acevero (D-District 39).

I fully support CE @Marc_Elrich ‘s decision. This is not the American flag, it’s a violation of the flag code that prohibits altering of the flag in this manner & an affront to the #BlackLivesMatter protests that I & others were a part of. Stop pandering & focus on police reform! https://t.co/Igh11NlHOC

In a tweet responding to Hogan, Acevero told the governor, “Stop pandering & focus on police reform!”

Del. Vaughn Stewart (D-District 19), responded to Hogan with a phrase from a popular meme: “Ok boomer.” The phrase is used by younger generations to respond to older generations’ criticisms.

Del. Jheanelle Wilkins (D-District 20) thanked Elrich for his stance, tweeting, “MoCo police should focus on shifting the culture and practices that have created distrust and the profiling and police abuse of Black and brown residents instead of advocating for this Blue Lives Matter flag.”

Thank you @Marc_Elrich for taking a stand. MoCo police should focus on shifting the culture and practices that have created distrust and the profiling and police abuse of Black and brown residents instead of advocating for this Blue Lives Matter flag. https://t.co/Wk1WJn09zX

“They need more support in order to continue to save lives!” Kagan tweeted.

#ThinBlueLine also includes our #FirstFirstResponders, the people who answer the 9-1-1 requests for service. They need more support in order to continue to save lives! #NG911 @911NENA911 @APCOIntl @MCP_911 @_911TI_ https://t.co/NrqFvmW3Gg

The debate over the flag is making national news and has been covered by Fox News, CNN, and CBS News.