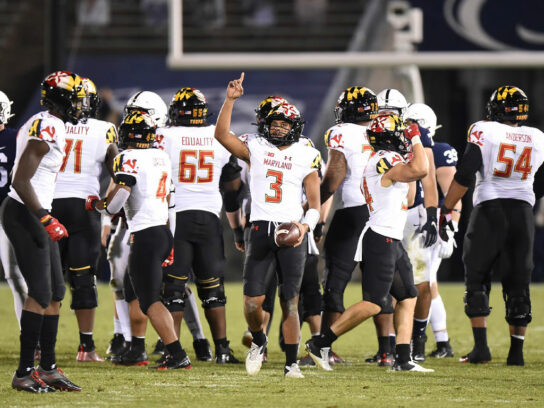 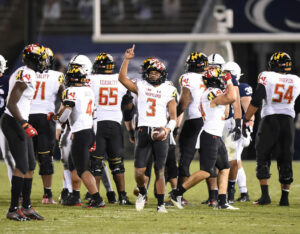 The Maryland Terrapins are making some noise in college football. For the second straight week, the Terps pulled off an upset – this time, a dominant 35-19 win over Penn State.

“I’m really happy that our young team got to enjoy success [at Penn State],” head coach Mike Locksley said, “which is a tough place to win.”

Following last week’s overtime win over Minnesota, the Terrapins continued their momentum traveling to State College, Pa to play perennial Big Ten powerhouse Penn State. The Terps’ 35 points were the most they’ve ever scored against the Nittany Lions. Maryland earned their first win over Penn State since November 1, 2014.

Maryland is the first team since 1978 to record outright upsets as an underdog of 17 points or more in consecutive games, according to ESPN.

The Terrapins surged ahead early in the game 14-0 on two crossing passes to Rakim Jarrett that turned into long touchdowns. Maryland led 28-7 at halftime. Jarrett, a freshman from St. John’s College High School in DC finished the game with five receptions for 144 yards (the second-most receiving yards ever by a Maryland true freshman) and two touchdowns.

Damascus alum Jake Funk also got in on the action for the Terrapins, rushing for 80 yards on 16 carries and a touchdown.

While the Terrapins’ offense has deservedly drawn the headlines, it was their defense that was the difference against Penn State. Maryland’s seven sacks were the most by the Terps in a Big Ten game since tallying seven vs. Rutgers on November 26, 2016.

“I’m so proud of the players in that locker room and how they bought into everything we’ve asked of them,” Locksley said, “We’re looking forward to enjoying this one for the next 48 hours.”

The road does not get any easier for Maryland with national title contenders Ohio State up next. The 3-0 Buckeyes come to College Park for a 3:30 p.m. kickoff on Saturday.

Terrapins Set to Kick Off Unique Season on Saturday