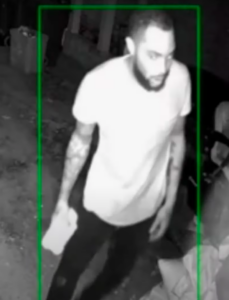 The Montgomery County Police Department (MCPD) released surveillance video of a suspect in theft from vehicles that occurred last month in Silver Spring.

On Aug. 23, officers responded to Locksley Lane in the Colesville area around 11:30 a.m. for a report of theft from vehicles, police said in a release Tuesday. The victim said property was stolen from his two vehicles parked overnight in his driveway. His surveillance footage showed someone walking inside the carport at 4:37 a.m. that morning, police said. MCPD asks for the public’s help in identifying him.

MCPD asks anyone with information to call the 4th District Patrol Investigations Unit at 240-773-5530. Those who want to be anonymous can call Crime Solvers of Montgomery County at 1-866-411-8477. Crime Solvers will pay up to $10,000 cash for information that leads to an arrest.