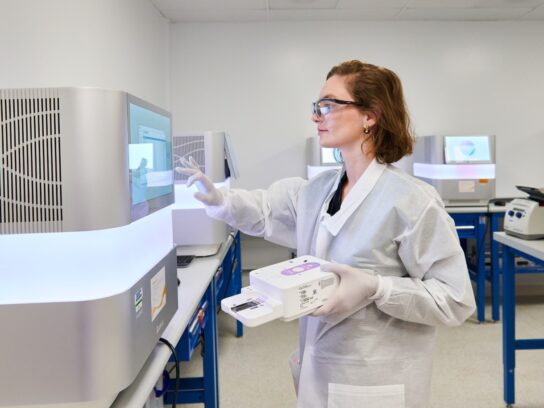 MilliporeSigma is expanding its biosafety testing work and has broken ground on a $286 million building that would increase its capabilities and consolidate its offices.

In 2024, the drug safety testing company in Rockville will open a 250,000-square-foot, six story building that will employee 500 new workers during the next four years.

The company’s goal is to ensure the safety of drugs to help “bring lifesaving medicine to patients,” he said.

Part of the company’s work centers around making sure there are no viruses introduced into the medicines it tests. It also works to focus any cuts into a person’s DNA where the medicine is placed are the right ones and no others are altered, explained Brad Hasson, director of lab operations for the company’s next generation sequencing.

Lange added, “We are committed and excited about the impact we will have on the Maryland community.”

County Executive Marc Elrich praised the plans, noting it is another piece in the area’s commitment to bring jobs in the life sciences and biotech sectors to the area as well as train students to fill the jobs at these companies.

“We are working to provide talent pools and bus rapid transit” so that workers can get from the Metro to the jobs, Elrich said. “The future is greater, and it’s getting better.”

Heather Gramm, Maryland’s assistant secretary at the Department of Commerce, added, “We are so thankful you chose Maryland and Montgomery County,” she said, noting, “It will really impact the area.”

MilliporeSigma has applied for a $1 million conditional loan through Advantage Maryland, which used to be called the Maryland Economic Development Assistance Authority.

MilliporeSigma currently has five buildings in Rockville. When this new one opens, much of its work will be consolidated there. It will consist of 70% labs and 30% office space.

The labs are home to the latest computers that automate much of the testing work. It took about 10 years for the Human Genome Project to study the entire genetic material of a human being, and the company’s computers now can do that “in under a week,” Hasson explained.

We are making a historic $286 mil investment in Rockville, Maryland, to expand our biosafety testing capacity. Before medicines are approved, they go through rigorous safety testing, and that's where our high-quality biosafety testing comes in. Learn more: https://t.co/wphCoPCvU5 pic.twitter.com/UdbbGKqQr6