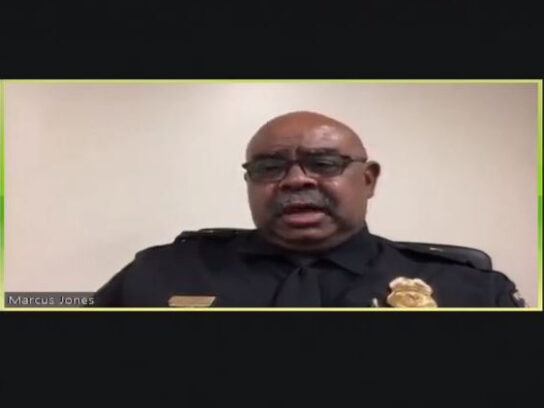 Six police chiefs from throughout Montgomery County as well as the County Sheriff detailed the importance of community policing during a June 11 Facebook Live virtual town hall on law enforcement.

They also stressed the need for good communications, empathy and the ability to treat all citizens fairly to build trust between police and residents.

Throughout the almost two hour conversation, the Facebook chat box lit up with complaints of a lack of transparency, poor training and the need to hold police accountable for their actions.

The town hall was held following recent police brutality incidents and was sponsored by the County’s Office of Human Rights, the Human Rights Commission and the County Committee Against Hate/Violence.

MCPD Chief Marcus Jones said he is working on a racial audit of his department and when it is completed, it will be made available to the public.

He also spoke of the importance of community policing so officers get to know the citizens and their needs.

He stressed the need for officers to have “total respect for the community,” and noted that officers are guardians, not warriors. He also noted that all his officers are taken to the African American History Museum as part of their training.

Training and hiring of officers was a major topic. Gaithersburg Police Chief Mark Sroka Katz noted that a good person can be trained to be a good officer, but the reverse is not true.

Rockville Chief Victor Brito called hiring the right officer is a big part of his job.

The chiefs explained that mental health treatment after a traumatic incident is important and when mandatory, the stigma of seeking help is reduced.

Before the chiefs spoke, County Executive Marc Elrich said the police are asked to do too much. The answer to housing, poverty and other social needs can’t be merely to call the police, he said.

Council President Sidney Katz called the current atmosphere, “the worst of times,” but said Montgomery County can partner together and come out stronger.

The fact that Montgomery County is diverse is a strength, not a problem, said Sheriff Darren Popkin.

Gaithersburg Chief Sroka -"People in the black community are scared of us," he said during town hall on law enforcent. "We have to work on that," he said.
He noted that most police officers serve with distinction and that the bad ones disgrace all officers @mymcmedia

Watch a recording of the virtual town hall.