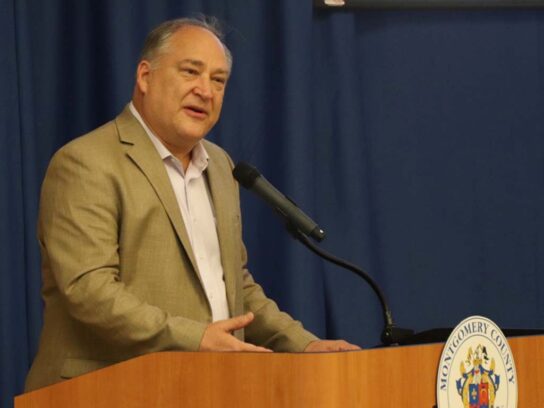 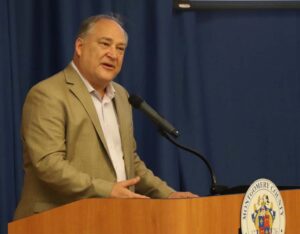 This post has been updated to include comments from Councilmember Will Jawando.

Montgomery County Executive Marc Elrich has concerns with a proposed council bill that would require prospective police officers to complete a 30-hour community-informed policing program prior to acceptance into the academy, said County Assistant Chief Administrative Officer Caroline Sturgis, who testified on Elrich’s behalf during a council public hearing about the bill Tuesday.

The Community Informed Police Training Act would require a 30-hour training program, developed in collaboration with Montgomery College, about community services and social justice for all prospective Montgomery County Police Department (MCPD) officer candidates. Performance in the course would have to be used to evaluate acceptance into the police academy. During the program, candidates would learn about topics related to racial equity and social justice, the history of policing, communications skills and de-escalation. According to a council staff report, other topics include active listening, conflict resolution and civic engagement. Councilmember Will Jawando, lead sponsor, introduced the bill with outgoing-Montgomery College President Dr. DeRionne Pollard in May.

“The County Executive supports the concept of this bill, but he has concerns with the way it is currently structured, as it may have unintended consequences,” Sturgis said Tuesday. She said Elrich supports including community-informed police training in academy training for all new officers, as well as mandating annual refreshers through in-service training for all officers. However, “this training should not be a prerequisite for entering into the police academy.”

She emphasized that Elrich supports the need for improved police recruitment and training.

“Last year the county executive launched an independent audit of the police department and a soon-to-be released preliminary report provides recommendations to enhance both recruiting and training,” Sturgis said. She said the report will be available next week and that Elrich is committed to following the recommendations/evidence-based best practices offered by the independent consultant that conducted the audit.

Jawando is glad Elrich supports the concept of the bill, but maintains that it is important to use the training to evaluate acceptance into the police academy.

“That’s one thing I feel pretty strongly about that I think is an important component of the bill,” Jawando told MyMCM. For example, he said, an applicant’s performance in a practicum about de-escalation, based in understanding the county’s diverse population and from a race-equity perspective, is very instructive on whether that person should be an officer.

“We all know that recruitment here and across this country is at an all-time low,” Holland said. He said local law enforcement agencies recruit officers from the same pool of applicants.

On average, he said, there are more than five MCPD officers leaving each month.

“To add another layer of requirements for Montgomery County at the applicant’s expense makes it even harder for the county to attract qualified candidates,” Holland said. He said topics in the bill are already taught in the police academy, and that the union would support an amendment to increase training on those topics for recruits.

Jawando said the training was never intended to create a cost burden on prospective officers. He envisions that Montgomery College and the county would subsidize the course. He said there would not be many classes held annually and the cost could be absorbed by the college.

Jawando said he does not share the same concerns that the training would hamper recruitment.

“I actually think you would get a whole different type of people that apply,” he said. Jawando said more than half of Montgomery College students studying law enforcement/criminal justice are students of color and about 75% live in the county.

“It takes all of us to ensure our community is a safe, healthy and a vibrant place,” he said. Rai said he believes the training will help officers develop deeper competency in race-equity perspectives.

“Officers will hone skills in mediation, conflict-resolution, de-escalation and communication. Without question, this partnership would become a national model and it will help Montgomery County be a safer place where all are guarded well,” Rai said.

Dr. Andrae Brown, psychology professor at Montgomery College, said the program will give police recruits access to education outside of the police department. He said the college has about 600 students preparing for law enforcement and criminal justice careers.

“With this program, together, we can shift the texture and fabric of Montgomery County for generations,” Brown said.

Today’s Council meeting will resume at 1:30 p.m. with 10 public hearings. You can view the staff reports for each of the public hearing topics at https://t.co/O2EPuKmtOC .
📺💻Watch live @CountyCableMoCo, Facebook or YouTube https://t.co/QGLyY4ETyx . pic.twitter.com/Panm1Ytp3T