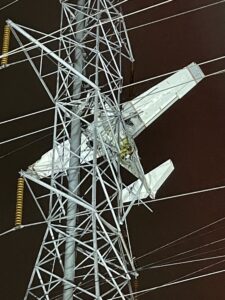 County Executive Marc Elrich thanked Montgomery County Fire and Rescue Service (MCFRS) for its “incredible response and recovery effort” following a plane crash Sunday in which a small aircraft with two occupants hit power lines in Gaithersburg and became caught in a tower.

The plane crash Sunday and a building explosion two weeks ago proved to be examples of Montgomery County’s first responding agencies “at their very best,” Elrich said during a media briefing Wednesday.

Elrich commended Pepco and AUI Power for their collaboration to ensure safety and restore power after the crash caused widespread outages.

He thanked the Montgomery County Police Department, the county’s Office of Emergency Management and Homeland Security and Maryland State Police for managing traffic and monitoring impacts on the county until power was returned.

Patrick Merkle, the pilot, was released from the hospital earlier this week. Janet Williams, the passenger, was still in intensive care at a local hospital as of Thursday afternoon.