At approximately 8:23 p.m., Gaithersburg and Montgomery County Police responded to Gaithersburg High School for the report of a fight.

Late in the game, a fight broke out between two players, which then transitioned to other players and coaches becoming involved, according to school officials. Both teams were disqualified, resulting in a double forfeiture of the game.

While police addressed the reported fight, other physical altercations between individuals—including students— began to break out in the parking lot. As a result, one school staff member sustained a non-life threatening injury and was treated by medical personnel. One police officer was assaulted but did not require medical care, according to authorities. Another individual was treated for lacerations.

“A few individuals believed to be involved in the various physical altercations were taken into custody and will be charged accordingly,” police said.

MCPS released a statement condemning the “abhorrent and unacceptable behavior” and said football operations at both schools would be suspended to assist the ongoing investigation.

GHS families – please see below the joint community message from myself and @NorthwestJags: https://t.co/OPNqyYg3jq

“This disrespectful and dangerous behavior is not what we model and communicate to our students and must not be tolerated. Fighting, and causing physical and emotional injury, is in no way an appropriate way to solve conflict,” the letter read. “We ask all those involved or who witnessed this event to consider what could have happened had our police partners, security personnel and school staff not acted so quickly to deescalate this incident.”

The school district said it will “pursue disciplinary actions against any individuals who are found to have participated in this large altercation, while working to bring communities together around the importance of upholding safe and respectful environments.” 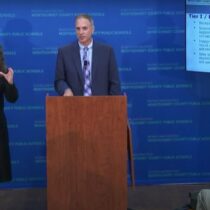