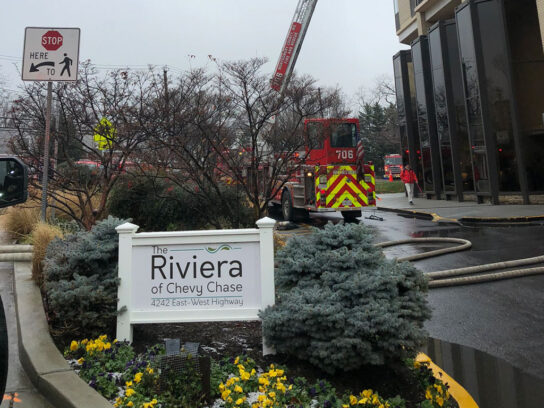 A fire at the Riveria House, an 11 story apartment complex on East-West Highway in Chevy Chase, has caused $75,000 worth of damages. As a result of the fire, two families have been displaced from the apartment complex.

According to Pete Piringer, spokesperson for Montgomery County Fire and Rescue, the fire started on the seventh floor in an apartment kitchen. The fire was likely caused when a combustible item in the dishwasher made contact with the heating element, Piringer said.

First responders were dispatched to the scene at about 10 a.m. on Monday—at the time, the seventh-floor apartment was unoccupied. More than 85 firefighters responded to the fire and they instructed residents in some parts of the building to evacuate and other residents were instructed to shelter in place.

Firefighters had the fire under control by 10:45 a.m. Piringer said the fire was contained in the kitchen but smoke traveled to other areas in the apartment building.

No one was reported injured in the fire and Piringer tweeted that firefighters also rescued a pet guinea pig.

The fire caused significant delays in the Bethesda-Chevy Chase area. There were closures on East-West Highway in both directions at Montgomery Avenue. Before 12:30 p.m., all eastbound lanes of East-West Highway had reopened.