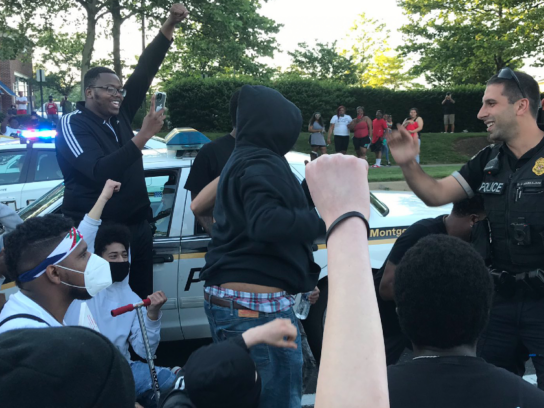 The climate throughout the United States is very tense right now. The death of George Floyd in Minneapolis and other deadly incidents have shined the light on racial inequality and sparked protests demanding justice all across the nation, including here in Montgomery County.

Montgomery County Police say the people who are protesting here have a message and they want to be heard. Captain Thomas Jordan, spokesperson for MCPD, says his department fully supports the peaceful protests that have been going on throughout the county. He added that the protests in Montgomery County have not been violent and destructive like the ones in Washington D.C the last couple of days.

MyMCMedia spoke with Captain Jordan about the protests.

Germantown had a real cool protest that we came upon, demonstration was peaceful, most of the Cops were talking to us and hearing us out, and kneeled with us. This energy should be circulated it was awesome ♥️🤙🏾 pic.twitter.com/rMC5tS5wK3