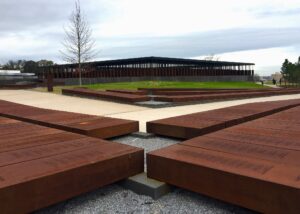 The National Memorial for Peace and Justice in Montgomery, Ala.

Montgomery County will host a series of events on Saturday, Sept. 25 and Sunday, Sept. 26 dealing with the lynchings of two Black men. The two lynchings took place in Rockville in the late 19th century.

According to the Montgomery History accounts, John Diggs-Dorsey was working as a servant in the home of James and Linnie Tschiffely when he was accused of raping Linnie Tschiffely; he was jailed on July 26, 1880. The following day, a lynch mob took Diggs-Dorsey from the jail and hanged him from a tree about one mile outside Rockville on Route 28. Sidney Randolph, a native of Georgia in his mid-twenties, was lynched in Rockville on July 4, 1896 by a group of white men from Montgomery County.

Three Montgomery County historians will conduct a virtual webinar titled “Unwritten Law”: A Symposium on the Lynchings in Rockville Saturday at 9 a.m. The historians will provide background on the economic, social, and political context of the county in the final decades of the 19th century and explore how the elements of these murders also occurred in other parts of Maryland and the country. More information is available on the Montgomery History website with a link to register for the webinar.

On Sunday, Sept. 26, there will be two events. Starting at noon, participants will join in a walk through Rockville from the site of the old county jail where both  Diggs-Dorsey and Randolph were held to the sites where the men were lynched.

The walk will be followed by a soil collection ceremony, music and reflections by community leaders and by a representative of the Equal Justice Initiative from Montgomery, Alabama. The Sunday events, organized and held by Montgomery County Lynching Memorial Project and the County’s Remembrance and Reconciliation Commission, will be in person. Registration is available online here.

Montgomery Community Media will stream Sunday’s soil collection ceremony starting at 4 p.m. on MCM’s YouTube channel. The ceremony will be held at Welsh Park, located at 344 Martins Lane in Rockville.

The soil collected will be sent to the Equal Justice Initiative in Montgomery, Ala.

Commission Remembers County Residents Lynched More Than a Century Ago

Lynchings in Rockville are Subject of Two-Day Virtual Discussion

Lynching Victim Is Honored With Soil Collection Ceremony in Poolesville