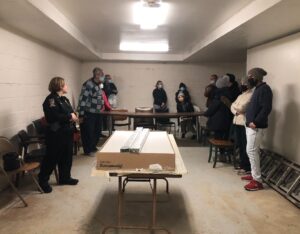 Officers and residents gathered in a community room at the Village Green Condominium in Rockville.

Montgomery County and Rockville City police officers spoke with about 20 residents Monday night answering questions at the Village Green Condominium after a resident was a victim of attempted armed carjacking in the parking lot last month.

“This is a very serious event,” Montgomery County Police (MCPD) Captain Stacey Flynn said. The suspects have not yet been identified. She said the Major Crimes Division is actively investigating and hopes to find leads and solve the case. Police released surveillance footage of the male and female suspects in the attempted armed carjacking that occurred around 5:45 p.m. Nov. 23. Police said they tried to open the victim’s car doors while he was in the driver’s seat and attempted to rob him at knifepoint. The suspects fled without taking anything.

Carjackings increased 126% this year through Sept. 30 compared to the same time period in 2020, according to county council documents prepared ahead of a virtual crime briefing Monday afternoon. From Jan. 2019 to Sept. 2020, the county averaged 1.6 carjackings per month. The average rose to 5.6 carjackings per month since Dec. 2020.

The adult male victim, who does not want to be identified for safety reasons, said he was caught off-guard because one of the suspects was a female. The male suspect knocked on his window to ask him where a bus stop was located, the victim said, and when he tried to point him in the right direction, the male pointed a knife to his forehead. The victim said if the female had not been there, he would not have rolled down his window for the male.

Flynn warned it’s common that people will try to ask a question before attempting to rob someone. Some suspects will intentionally have a female accomplice or child around so victims will let their guard down.

.@mcpnews and @RockvilleCityPD speaking to residents, answering questions at the Village Green Condominium after a resident was a victim of attempted armed carjacking in the parking lot last month. @mymcmedia pic.twitter.com/EDwxDP3m6T

MCPD asks anyone with information about the crime to call the Major Crimes Division at 240-773-5070.

In response to a resident’s question, Flynn said police at this point do not know if the victim, who is Asian, was targeted in a hate crime. Once the case is solved, police could look into whether that was a factor, Flynn said. She urged the residents to think now about how they would respond if they witnessed the crime.

“When we think about how we would handle it, we are better equipped to handle a crisis when it does happen in front of us,” Flynn said.

“You can make noise, you can say ‘Hey! Stop! I’m calling the police!’” said Sgt. Tocarah Hargrove. She said if someone is targeted in an armed carjacking by a suspect who has a gun, give up the car.

“Your life isn’t worth property.”