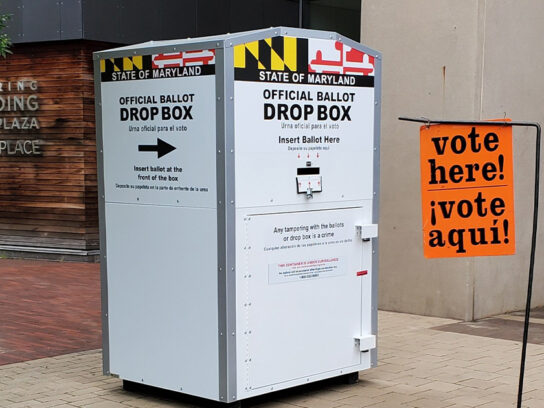 In a letter dated June 1, Senator Cheryl Kagan (D- 17, Montgomery County) urged Governor Larry Hogan  to declare a state of emergency regarding an “impending electoral crisis.” The issue at hand is the counting of mail-in ballots.

Maryland regulations prohibit local election boards from canvassing (or counting) mail-in ballots until the Thursday following an election. A bill sponsored by Kagan,  SB 163, would allow the canvassing of mail-in ballots up to eight days before early voting. The bill also addresses issues in ballot curing. That allows voters to fix issues on their ballot, such as a missing signature, so their ballot can be counted.

“I was surprised and disappointed by your veto of SB163 (and HB862)- my emergency legislation to ensure that Maryland’s elections run smoothly in 2022 and beyond,” Kagan wrote in her letter.  Kagan added her bill was designed to alleviate the pressure local election boards will be subjected to during the upcoming Primary Election. Her proposal would allow ballots to be counted about a week in advance of the July 19 Primary date.

Stress was felt around the country during the 2020 elections when ballot counting took a few more days than the public expected. In her letter, Kagan brings up the issues of short-staffed election judges, supply chain issues, delays in the approval of redistricting maps, and managing a historic increase in requests for mail-in voting. All this while dealing with public distrust in the mail-in ballot system, as the Primary Election date was pushed back.

“Data released after polls close on July 19 and November 8, 2022, will include only the ballots cast in person, either during Early Voting or on Election Day itself,” Kagan writes. “With the growing popularity of voting remotely, it won’t be until Thursday morning at 10 a.m. (July 21 and November 10th) that regulations allow the canvass to begin.”

Kagan believes “we’ll be well into August” before the certified number and primary winners are known. Currently, July 29 stands as the official certification date.

“Maryland could be at risk of violating the MOVE Act requirement to mail ballots overseas not later than 45 days before a federal election,” Kagan writes. The shorter timeline between the Primary Election and the General Election, Kagan believes, “could make it impossible” for that deadline to be met.

The Maryland Associate of Counties also released a statement on March 22 in support of Kagan’s bill.

As of this writing, there has been no response by Governor Hogan to Kagan’s letter.