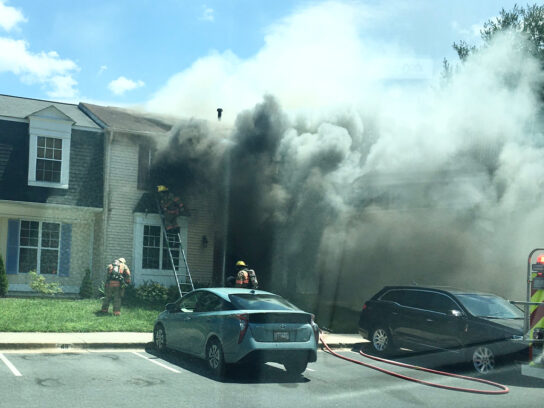 Update (7:45 p.m.): Pete Piringer tweeted Tuesday that an adult male has been arrested in connection to the White Oak townhouse fire. Piringer told MyMCMedia the man was related to the family that lived in the townhouse.

Original Post (6 p.m.): A male suspect has been taken into custody for questioning about possibly committing arson to a townhouse in the White Oak area Tuesday afternoon, according to Pete Piringer, spokesperson for Montgomery County Fire and Rescue Services.

Piringer says at 1:45 p.m., about 100 firefighters arrived at the 1700 block of Featherwood Street (near Old Columbia Pike), to “heavy fire conditions” after receiving reports about a townhouse that was intentionally set ablaze.

Firefighters did not immediately find the person suspected of setting the fire to the house, Piringer said. However, Piringer’s said, “Montgomery County patrol officers were able to find that person a couple blocks from the scene.”

The suspect, a family member of the household, has been taken into custody and is being questioned by Montgomery County fire investigators, Piringer said.

Piringer said firefighters extinguished the fire in about 15 minutes and were able to account for everyone in the household. The family will be displaced and Piringer expects families that live in the surrounding townhouses will also be displaced. However, the cost of damages is still not clear.