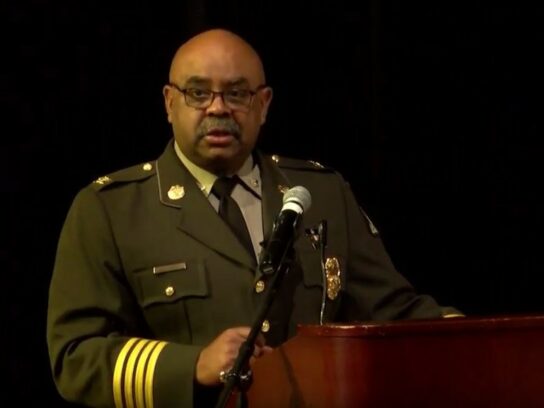 Chief Tom Manger announced his retirement in January after 15 years leading the county police force. Marcus Jones, who had held several top positions, said he wanted the job, but focus turned to Tonya Chapman, the former police chief of Portsmouth, Va. Eventually, she dropped out of the running and County Executive Marc Elrich tapped Jones.

Elrich spent a good bit of the year defending the county’s policies on how it deals with immigrants who are wanted by Immigration and Customs Enforcement. He signed an executive order spelling out policies that were first verbalized by his predecessor, Ike Leggett. And although he insisted the county wasn’t a “sanctuary city,” a Guatemalan national accused of child abuse was released after he posted bond. ICE was given 15 minutes’ notice. ICE agents captured him three days later.

Elrich Meets With ICE in Rockville

Downtown Silver Spring was on alert after police announced an officer was shot. Later, it was revealed that the officer had taken his life.

And officer kneed a drug suspect during an arrest, prompting an assault charge.

An officer was filmed using the N-word in cell phone footage and in body camera video as a group of African-American men were detained outside a McDonald’s.

Prosecutors say Rondell Henry of Germantown stole a U-Haul truck to run down pedestrians at National Harbor. Allegedly inspired by ISIS, Henry’s case is still in the court system.

7. Greater Council Control Over the Police

The County Council introduced legislation this year that give the public greater scrutiny over police operations.

Catherine Hoggle, the woman charged with killing her two children who went missing in 2014, remains incompetent to stand trial. She will next appear in court in February.

In one of his last acts as police chief, Tom Manger ruled that the police shooting death of Robert White was justified. White, an unarmed African-American man who was shot and killed by Officer Anand Badgujar of Montgomery County police.